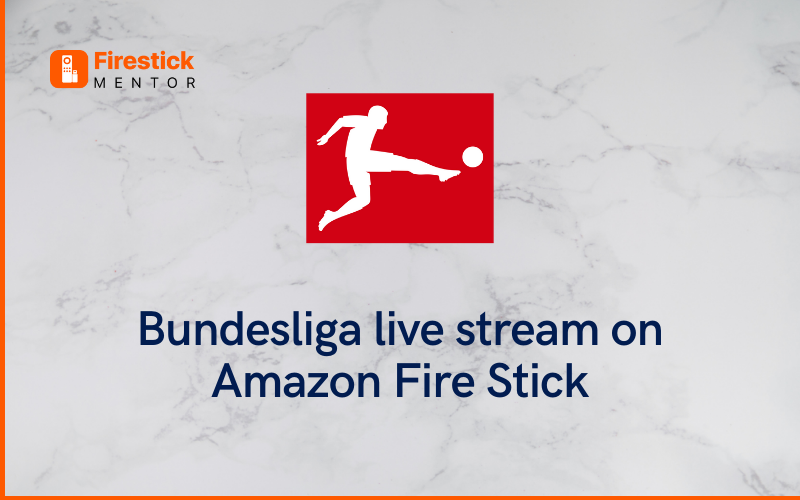 The German Bundesliga draws more fans into the stadium for each game than the Spanish La Liga or English Premier League (EPL). It is back in play for the 2021–22 season and is fairly well-liked among football enthusiasts from all across the globe.

The football league is the main league in Germany and has been going since it was founded in 1963, almost five decades ago.

For nine exhausting months, the league’s 18 clubs battle it out for the winning title. The Bundesliga likewise runs from August to May the following year, much like the La Liga and EPL.

There are currently 56 clubs competing in the tournament, and With 30 victories overall, the Bayern Munich team is the most dominant among them.

Since a recent agreement between ESPN and Bundesliga authorities, Fox no longer has the exclusive rights for streaming the Bundesliga games in the US. Most of these services have official apps for the Amazon FireStick device; thus, sideloading or jailbreaking your FireStick is unnecessary.

You also would not be pursuing any illegal sources because these applications have the legal permission to watch Bundesliga action on the FireStick.

ESPN+ is one of the factors driving ESPN’s constant push toward sports partnerships. The channel intends to position ESPN+ as the one-stop shop for streaming important sporting events.

The company has ensured that ESPN+ is accessible on all of the top streaming services. It is compatible with several devices such as Apple TV, Android TV, Windows, Android, iOS, FireStick, etc.

Unfortunately, there isn’t a free trial available for the app, so you can not use the service before deciding to sign up for a monthly membership.

Furthermore, ESPN+ is solely designed for sports enthusiasts, and you will not be able to watch TV shows or movies on it.

Sling TV offers two separate channel-offering plans, the Orange plan and the Blue plan, both of which cost USD 35 monthly.

The Orange package contains more than 30 channels, while Sling TV has more than 50 channels overall. It is sufficient to meet your streaming requirements for the Bundesliga, as well as other shows and movies, etc.

Sling TV is giving new subscribers a discount of USD 10 as well.

How to watch Sling TV on Fire Stick

You may watch Bundesliga games on a FireStick with fuboTV, which offers over 200 live channels and can replace your cable connection easily.

Sports, news, movies, children, and documentaries are just a few categories the service covers. Bundesliga games may be streamed without charge for a week if you have signed up for a free 7-day trial of fuboTV.

In case you enjoy the service, you may upgrade to the subscription plan and keep watching Bundesliga games online.

For new users, Hulu is providing a 7-day free trial as well. You may easily watch Bundesliga for a whole week if you have signed up for the free trial.

With the launch of YouTube TV, Google entered the streaming service industry and quickly gained popularity.

The service offers 85+ live channels from all USA’s major networks. In addition, it provides unlimited cloud storage, which most competitors don’t offer. Similar to other services, new users are also given a free trial on YouTube TV.

Nevertheless, depending on the situation, you might get fewer than two weeks of the free trial.

The famous NBC Universal introduced the Peacock streaming service in April 2020, and 22 million people have already signed up for it.

All originals by the company are available on Peacock, which includes several movies and popular TV series. Additionally, the service offers ESPN channels.

Thus customers can easily view all Bundesliga games on their FireStick device. Peacock, a new player in the market, is providing a 7-day free trial for its premium services, allowing you to stream Bundesliga games for free during that time.

How to install Peacock TV on Fire Stick

Additionally, AT&T, the 2nd largest carrier in the USA, also offers a streaming service. More than 65 TV channels are supported by AT&T TV, which includes some well-known ones such as ESPN, FOX, AMC, and ABC. You can enjoy its services starting from USD 69.99 per month.

Sportsnet has secured the rights to stream all Bundesliga games in Canada since 2015. The broadcaster ultimately released the Sportsnet NOW app for FireStick in 2019.

You can easily stream live games, highlights, interviews, and match analysis on six Sportsnet channels with the SN NOW+ membership.

Can I use my FireStick to watch every Bundesliga game?

You can watch all Bundesliga games on FireStick using official apps, an IPTV provider, a Kodi add-on, or browsing websites.

How can I get free access to Bundesliga games on FireStick?

On FireStick, Bundesliga is available for free for over a month if you use trial versions of the official applications. You could wish to accept assistance from an IPTV service or Kodi add-on to watch the remaining matches for free.

Bundesliga is accessible if you know how to get it. We hope our guide will help you access it.