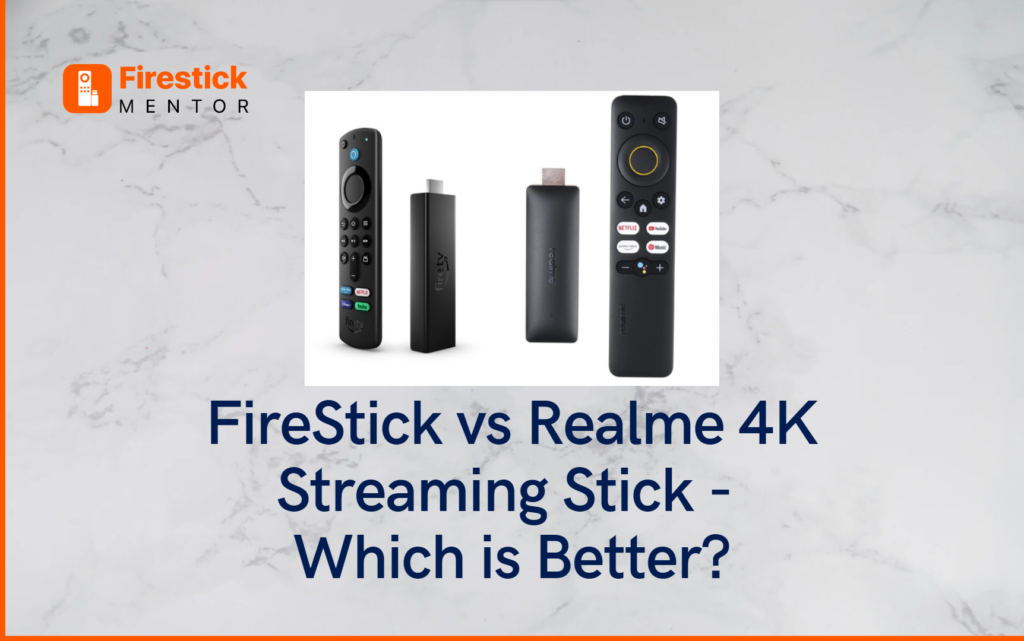 If you’re not familiar, Google TV is a redesigned interface built on top of Android TV that focuses on content recommendations.

At its foundation, it is still Android TV, although with a redesigned user interface that is cleaner and more contemporary. This is one of the main benefits of the Realme TV Stick.

On the other hand, the Amazon Fire TV Stick converts your normal TV into a smart TV.

It enables you to access all of your preferred TV series and movies from well-known streaming services like Netflix, Hulu, HBO Max, Disney+, and Amazon Prime in one location on a much-liked and user-friendly platform.

The Amazon Fire TV Stick also supports a variety of apps that can replace the cable if you wish to forgo cable services.

You can purchase a subscription for live streaming services such as Sling TV, Hulu+ Live TV, YouTube TV, fuboTV, and more to watch your preferred TV shows, sports, news, and other programs live or on demand. Some of these services also offer DVR, so that you can record your favorite shows and watch them later at a time of your convenience.

Read More: FireStick vs Chromecast – Which is Better?

Both have dongle designs, but the Realme stick is a little smaller and thinner. The size of the streaming stick should not be a factor in your decision-making process, as no matter what device you choose, it will be plugged in behind your TV and will not be visible to you once it has been plugged in.

Both devices plug into the HDMI port of the TV. They are powered by a brick and USB cable (included in the box) via the micro USB port on the dongle.

Conclusion: Both devices are very similar in design and form factor.

The operating system on these devices accounts for the biggest visual change between the two. However, some of you might be surprised to know that, at the core, both are running Android OS. The Realme stick is running on Android 11. Meanwhile, the Fire TV Stick is running the Fire TV OS.

Conclusion: Both devices have a similar operating system and have only visual differences.

User experience and performance with the Fire TV devices have always been a breeze. It is very smooth and lag-free. FireStick received regular updates which is why it has become well-optimized over the years.

The almost flawless performance and the smooth interface is the reason it is preferred over other devices in the market.

Now coming to the Realme Stick, the Google TV OS isn’t far behind anymore. It has a huge full-screen UX and features wallpapers from the content offered by different OTT apps.

Additionally, it has got Topics, got an Apps Row, followed by popular shows, and tones of content ties below without a blink. It is clearly inspired by the Fire TV OS or actually even by the patch-all interface that we’ve seen on Xiaomi and Redmi TVs.

Conclusion: Both devices have a colorful and immersive experience, but most users believe that the Fire TV Stick has better and snappier animations.

The Realme TV Stick has 2 GB RAM, while the Fire TV Stick 4k has 1.5 GB RAM. This is a true example of good optimization. Then both of them come with the same 8 GB internal storage. Both have the same dual-band Wi-Fi, 2.4 and 5 GHz. Both support Bluetooth 5.0, so you can connect Bluetooth earphones, headphones, or even a Bluetooth gamepad for gaming.

Conclusion: In regards to optimization, the Fire TV Stick is better.

Now both devices support 4K output, but the Fire TV Stick 4K comes with Dolby Vision and Dolby Atmos support with HDR10, while the Realme Stick comes with only HDR and HDR10.

Now, even though the Fire TV Stick has Dolby Vision and Dolby Atmos, to take advantage of that, your TV also has to support it.

Conclusion: The Fire TV Stick provides a richer and cleaner picture in comparison to the Realme Stick. The difference is minor, as both offer a great visual experience.

Now coming to the apps; frankly, the app collection on both these devices is almost at par, including games, so you can’t rate which is better. In fact, apps like Netflix, Prime Videos, and YouTube usually come preinstalled on both devices.

There is an Apps tab on Google TV and you can find tons of apps and games. On the Fire TV Stick, there’s a dedicated app segment from where you can download the same.

If you are a Prime Video fan, then the experience on the Fire TV Stick is by far superior. The Fire TV Stick also has a live tab where it showcases apps that support live TV channels and streaming. It’s really convenient.

Conclusion: The live app feature is a plus point. Therefore, the Fire TV Stick is superior in this category.

The Realme Google TV Stick supports Chromecast, where you can mirror content directly on your TV using your phone’s casting option. This works on iPhone and Android phones.

At the same time, the Fire TV Stick supports wireless mirroring, which essentially mirrors your phone’s display to the TV. However, this is limited only to Android phones.

Conclusion: Unlike FireStick which only allows casting from Android phones, the Realme Streaming Stick leads the category as it also allows iPhone users to mirror content on the big screen.

Both are Bluetooth remotes with very similar minimal designs, with a DPAD in the center to navigate. They both have power buttons on the top alongside dedicated buttons for the voice assistants; Alexa for FireStick, and Google Assistant on Realme 4K Streaming Stick.

Both have volume buttons and some shortcut keys for popular apps. But only the Fire TV remote has Rewind, Forward, and Pause Play buttons, which can be handy while you’re watching movies.

Conclusion: There is no clear winner as both the remotes are almost similar.

FireStick vs. Realme 4K Streaming Stick – What To Buy?

The Google TV OS on the Realme TV Stick is definitely like a breath of fresh air. If you want to stay in the Google ecosystem and you prefer Chromecast, then you go for the Realme Google TV Stick.

But if you like Alexa, and Amazon or are someone who wants snappy performance, better experience, Dolby Vision, and Dolby Atmos, then you must go for the tried and tested Fire TV Stick 4K. FireStick will have more utility for iPhone users as it allows mirroring via iPhone.

How to Get The Best FireStick VPN in India

How to Get the Best FireStick VPN in Ireland